A 2% to 3% annual rate of inflation is considered optimal, meaning that sustained levels outside of these targets are undesirable and while hyperinflation (out-of-control inflation, greater than 50% per month) is not a concern in the developed world, metrics reported in May, 2022 showed that levels remained elevated with the United States recording 8.6%, the Euro area posting 8.1% and the Australia region experiencing 5.1% gain.

As the topic continues to rear its head, understanding interest rates and how they are utilised to combat inflation/deflation is becoming increasingly important. Interest rates may also impact investment portfolios in an unfavorable manner, thus, below is a primer on the subject which covers what interest rates are, how and why they are implemented and the possible impacts in an attempt to help you comprehend and evaluate the current economic landscape and the future.

An interest rate determines the amount a lender charges a borrower based on a principal amount (loan value) and is expressed as a percentage on an annual time frame.

Within financial markets, interest rates are not those offered by commercial banks (which we will refer to as banks) but rather the rate set by the central bank of the region (national bank for a country's government) which determines the rate at which banks lend to each other overnight. In the United States it is referred to as the Federal Reserve Funds Rate (Fed rate) and in Australia the Cash Rate.

Monetary policy is the set of tools centrals banks utilize to control the supply of money within the economy and their influence on interest rates is the primary mechanism used for achieving their goals of maximum employment, stable prices, and moderate long-term interest rates. The terms dovish and hawkish monetary policy are used often with the former being promotion of an accommodating or expansionary policy to foster economic growth through lower interest rates while the latter is a more restrictive or contractionary policy, used to manage inflation though higher interest rates.

At the end of each day and after accounting for their daily operations, a bank may require additional cash to cover their shortfall or maintain their surplus money reserves at a level defined by their central bank in order to maintain a liquid and stable banking system. In order to do so, they borrow money overnight from other banks that may hold a surplus of cash after accounting for their own daily operations. In Australia, this rate is called the Bank Bill Swap Rate (BBSW) which should not be confused with the Cash Rate but correlation (relationship) between the two is high.

When a central bank decreases/increases the interest rate, the cost of borrowing for banks also falls/rises in the overnight market. In the case of a decreasing interest rate environment, cost of borrowing for the banks decreases and without passing on the rate decrease on the fixed and variable loans offered to their customers, their profits will increase. On the flipside, a rise in the interest rate in the overnight market will increase the cost of borrowing for banks and without passing on the increase to their customers, their profits will decrease. This may explain why banks seem hesitant to pass on an interest rate cut to customers but are quick to push through a rate rise as quickly as possible.
Expanding beyond financial institutions, as the cost of borrowing decreases a business can take on additional debt and seek to grow the company with a larger workforce, thus reducing the overall unemployment rate, one of the goals mentioned previously of monetary policy. As average income per household rises, higher demand for goods and services can cause an uptick in inflation and because another aim of monetary policy is stable prices, central banks act to counterbalance outsized inflation by increasing the cost of borrowing which can then cause businesses to possibly cancel or postpone their growth plans and reduce the need for additional and possibly current overall employee headcount. At a very basic level, this process is in essence the business cycle or economic cycle as can be seen in figure 1. 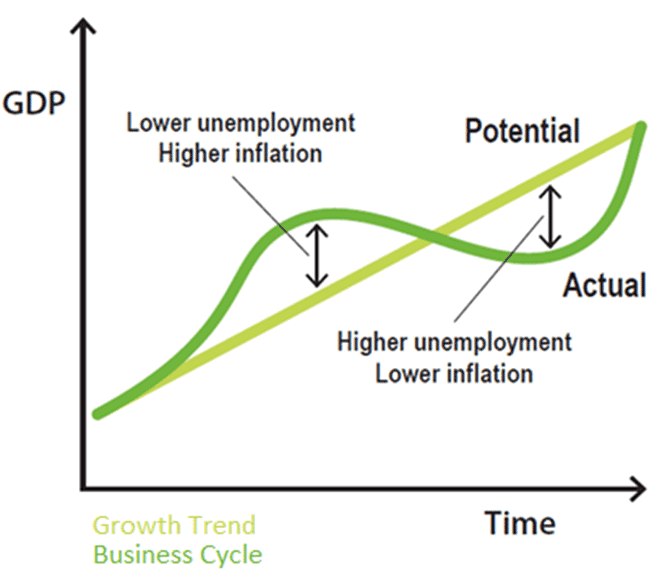 Under Interest Rate Impact on Equities, Bonds and Currencies

Investors around the world monitor central bank decisions with the most “important” announced by the United States Federal Reserve which normally meets every six to seven weeks, eight times a year. In Australia, the Reserve Bank meets eleven times a year on the first Tuesday of each month, except in January. It is important to be mindful of these events as markets can react sharply when an interest rate decision is announced.
A shift in interest rates can have varying effects on the asset classes with those more relevant to an individual investor outlined below. Note that these are the expected effects in a rising interest rate environment and the opposite can be expected in a falling interest rate environment but multiple additional factors influence asset class returns, thus, results may vary.

Equities: In the immediate short-term after a rate hike is announced, it is not uncommon for the markets to experience a sell-down (Figure 2, column 3) with the knee-jerk reaction fueled by a variety of factors:

In previous rising rate environments, equity returns on average have declined 1.08%, 1-month after the hike, however the relationship between a gain or loss is seemingly non-existent (Figure 2, column 4), so we cannot infer the direction of the market after an interest rate decision.

Expanding the time frame out even further, the three prominent United States indices have posted exceptional average returns with the S&P 500 rising 62.90% (Figure 3, column 3) with the sole negative period occurring during the Dotcom crash. If we remove the bull market from December 2008 to July 2019 to eliminate the skewness in the data, the average return of the Dow Jones Industrial Average, the S&P 500 and the Nasdaq was still +15.20%, +17.85% and +17.93% during a rising rate period. While past performance is not an indicator of future performance, in recent history, investing while rates rise has not hindered the endeavor for building wealth. 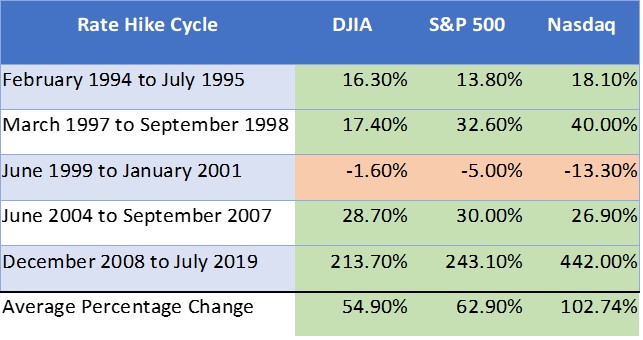 Even though we omitted the more complicated theory and aspects, the topic of interest rates can still be complex and confusing. However, for an investor with limited knowledge on the topic, if you can try to understand the basic fundamental concepts we explained, then as you continue to monitor the impacts of interest rate events around the world, your knowledge will improve and your understanding as to why markets reacted the way they did will hopefully lead you to making better decisions for your investment portfolio. Figure 4 shows the annualized returns of sub-asset classes during the previous two rate hike periods. 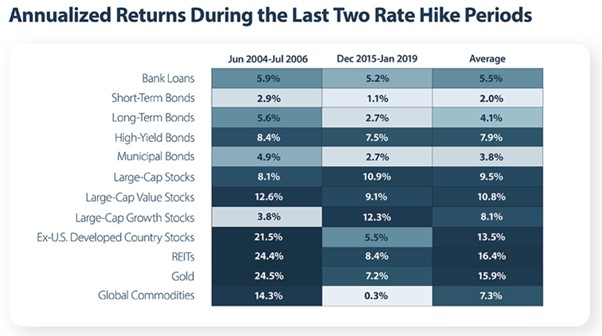 All information contained in this publication is provided on a factual or general advice basis only and is not intended or be construed as an offer, solicitation, or a recommendation for any financial product unless expressly stated. All investments carry risks and past performance is no indicator of future performance. Before making an investment decision, you should consider your personal circumstances, objectives and needs and seek a professional investment advice. Opinions, estimates and projections constitute the current judgement of the author as at the date of this publication. Any comments, suggestions or views presented in this communication are not necessarily those of HALO Technologies, Macrovue or any of their related entities (‘we’, ‘our’, ‘us’), nor do they warrant a complete or accurate statement.

Doctor Copper and the Energy Transition

The U.S. Recession: Are We There Yet?

China Investing Demystified: Why Invest in China,...
Should You be Investing in Europe Right Now?

Get market insights and company news
direct to your inbox.