The U.S. Recession: Are We There Yet?

Some people assume a recession is when real GDP contracts for two consecutive quarters as it did just recently. But this definition hasn’t been fulfilled in two out of the last three recessions. The 2020 downturn lasted just two months, not two quarters. In the brief 2001 recession real GDP didn’t contract for two quarters in a row either. So, it is likely that definition is out of date.

Q2 GDP fell at a 0.9% annualized rate as inventories, residential investment subtracted from growth after a 1.6% decline in the first three months of the year. Consumption, business investment remained positive, however.

That said, we do not believe the U.S. economy is in recession…at least not yet. Consumer spending has been too strong, as illustrated by the “spending on services” section in the chart below. 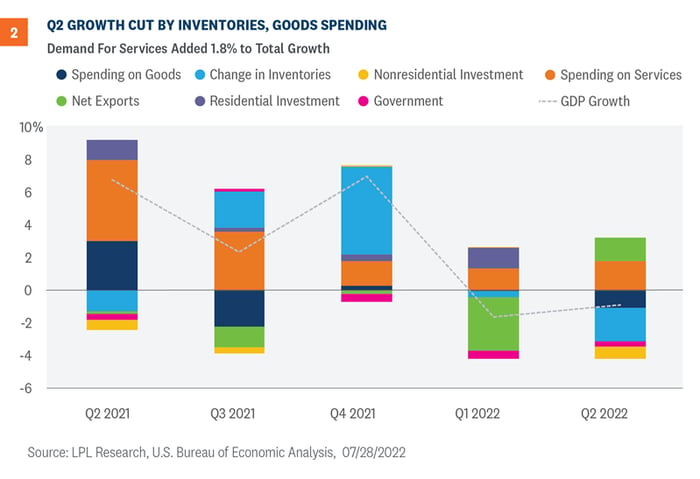 That’s because recessions are officially determined by a group of economists at the National Bureau of Economics (NBER) and they use a host of measures beyond real GDP to make it official.

Here’s how they describe their Business Cycle Dating criteria:

“The NBER’s definition emphasizes that a recession involves a significant decline in economic activity that is spread across the economy and lasts more than a few months.”

“The determination of the months of peaks and troughs is based on a range of monthly measures of aggregate real economic activity published by the federal statistical agencies. These include real personal income less transfers, nonfarm payroll employment, employment as measured by the household survey, real personal consumption expenditures, wholesale-retail sales adjusted for price changes, and industrial production. There is no fixed rule about what measures contribute information to the process or how they are weighted in our decisions. In recent decades, the two measures we have put the most weight on are real personal income less transfers and nonfarm payroll employment”. 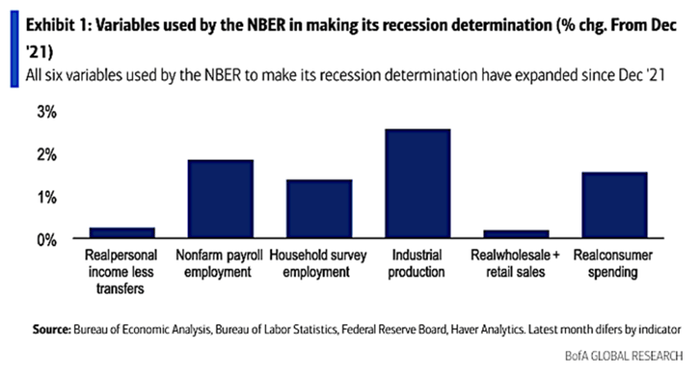 These indicators would have to go seriously south: 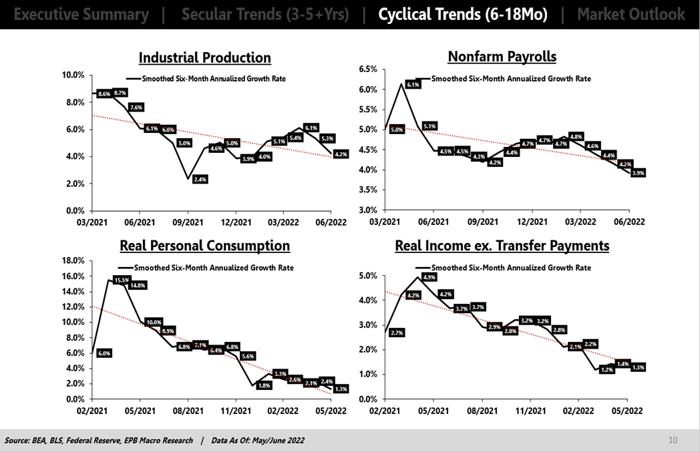 The typical U.S. household earned more than ever as of May—even after accounting for inflation. And their finances were secure, with consumer spending rising at a steady clip even as their saving rate remained elevated.

Those numbers don’t look recessionary to us. 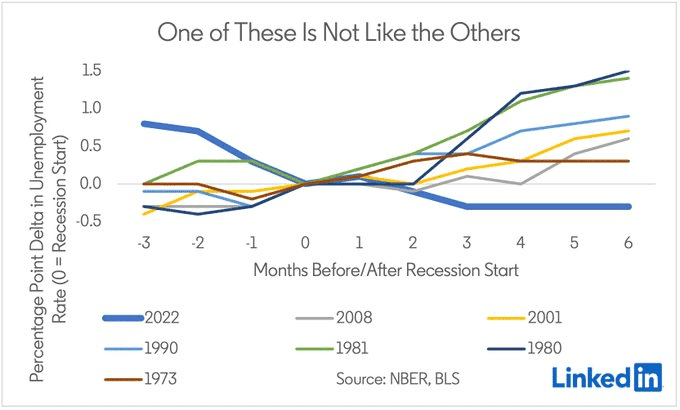 Strong labor demand means a US downturn is unlikely in in 2022. Near-term recession models are sending a relatively benign signal -- 38% chance over 12 months.

The latest jobs figures released last Friday, Aug. 5, 2022 are really the icing on the cake.

Job gains were broad-based and especially prominent in sectors such as education, health care, and government. Firms ramped up production and increased manufacturing payrolls by roughly 30,000 in July. New jobs in manufacturing are likely due to improved supply chains and this sector should continue to add jobs as remaining supply bottlenecks improve

So, over half a million jobs created in one month and a record low unemployment rate.

It’s official then- the U.S. economy is NOT in a recession.

All information contained in this publication is provided on a factual or general advice basis only and is not intended or be construed as an offer, solicitation, or a recommendation for any financial product unless expressly stated. All investments carry risks and past performance is no indicator of future performance. Before making an investment decision, you should consider your personal circumstances, objectives and needs and seek a professional investment advice. Opinions, estimates and projections constitute the current judgement of the author as at the date of this publication. Any comments, suggestions or views presented in this communication are not necessarily those of HALO Technologies, Macrovue or any of their related entities (‘we’, ‘our’, ‘us’), nor do they warrant a complete or accurate statement.

The opinions and recommendations in this publication are based on a reasonable assessment by the author who wrote the report using information provided by industry resources and generally available in the market. Employees and/or associates of HALO Technologies or any of the other related entities may hold one or more of the investments reviewed in this report. Any personal holdings by HALO Technologies or any of the other related entities employees and/or associates should not be seen as an endorsement or recommendation in any way. HALO Technologies Pty Limited ACN 623 830 866 is a Corporate Authorised Representative CAR: 001261916 of Macrovue Pty Limited ACN:600 022 679 AFSL 484264. MacroVue Pty Limited is a wholly owned subsidiary of HALO Technologies Pty Ltd. These companies are related entities with Amalgamated Australian Investment Group Limited ABN 81 140 208 288 (AAIG).

Doctor Copper and the Energy Transition

Get market insights and company news
direct to your inbox.